The devotion to Christ the King 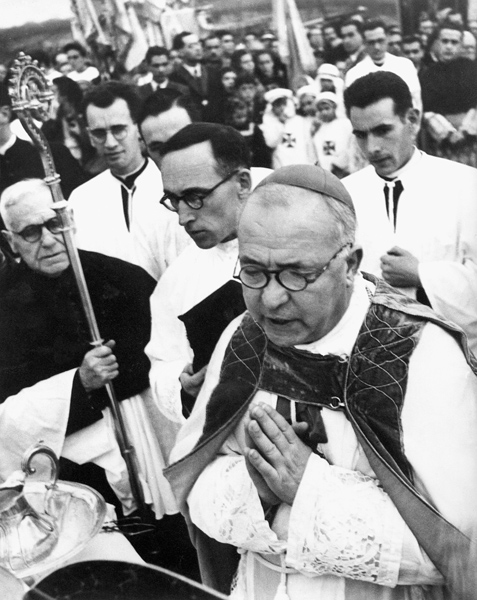 The devotion to Christ the King was specially promoted by Pope Pius XI, who instituted the respective liturgical feast, during the Holy Year of 1925, through the Encyclical “Quas Primas” (December 11, 1925), to be celebrated every year on the last Sunday of October. This Pope, the Pope of Missions and of Catholic Action, was Pope during the time between the two great wars which blooded Europe and the World. He placed the blame for them on the disregard or contempt of people, families and societies, specially in old Christian countries, for the demands of Christian life, that is to say, on the disregard for the holy will of Jesus Christ, Lord and King of all Mankind.

This devotion is deeply rooted in the Bible, in both the Old and the New Testament. It suffices to recall that, during his questioning by Pilate, Jesus stated to be King, although not of this world. Besides that, the very tile of Christ, Greek translation of the Hebrew Messiah, which in Portuguese means “Ungido”, evokes the ancient tradition of anointing with olive oil – in order to signify the penetration of the Holy Spirit – prophets, priests and kings. The Holy Spirit descended on Jesus like a dove, when He was baptized in the River Jordan, at the beginning of His public life.

In the time of Pius XI one still believed in the idea that the traditionally Christian States should officially recognize the kingship of Jesus Christ and consequently take into account, in their legislation and public government, the principles of the Law of God and the guidance of Holy Mother Church, true Mystical Body of Christ. Thence the call for the instauration in the different societies of the Social Reign of Christ, the great ideal of Catholic Action in particular, very much promoted by Pius XI, and also an objective of the missionary activity to which this Pope gave much impetus. It is in this ecclesial context that the idea of building a Monument to Christ the King is born, as a response to the appeals of the Pope.

With the institution of this Feast, the expected fruits of Catholic militancy would be liberty, order, tranquility, harmony and peace amongst men.
The motive for instituting this Feast in the year 1925 was the celebration of the XVI Centennial of the Council of Nicaea, whose doctrine of Substantial Equality between Christ and the Father is based in His Kingship.
The Pope set the last Sunday of October for this celebration, mainly because he had in mind the previous Feast of All-Saints. The purpose was to openly proclaim the glory of Him Who triumphs in all His chosen ones. It would be good to make, on this Feast, the Consecration to the Redeemer’s Heart.

After Vatican Council II, in very different times, marked by the Church’s acceptance of the laical character of public power in a world that is multicultural and full of several religious beliefs, the Feast of Christ the King stayed in the general calendar of the Church, but with a more spiritual and liturgical meaning, being celebrated on the last Sunday of the Liturgical Year (34th Sunday in Ordinary Time), thus concluding the yearly celebrations of the Christian mysteries.

The Feast was thus placed within the scatological context that characterizes the last Sundays in Ordinary Time.
Now we can see more clearly that the glorified Lord is the convergence point not only of the whole Liturgical Year, but also of our entire earthly pilgrimage: “Jesus Christ is the same, yesterday, today and tomorrow” (Heb 13, 8), “The Alpha and the Omega, the Beginning and the End” (Rev 22, 13). Thus, on the last Sunday of the Liturgical Year emerges the figure of Christ, King of Glory, the end of human history, convergence point of the desires of History and of Civilization, center of humankind, joy of every heart and total plenitude of all their longings. Vivified and gathered in His Spirit, we walk as pilgrims towards the consummation of human history, which coincides perfectly with His design of Love: “to bring all things in the Heavens and on Earth into one under Christ’s headship” (Eph 1, 10). In this celebration the words of Jesus to Pilate are specially taken into account: “Yes, I am King, but not of this world”.

The Monument to Christ the King is, therefore, a call for all men to think about their ultimate end, as well as to know that they all have a place in the Heart of God: “A visible sign that God wants, through Love, to conquer to Himself all of Mankind”.