Our Lady of Peace Chapel

Within the four pillars of the Monument, symbol of the four cardinal points, there is situated the Chapel of Our Lady of Peace, planned by Architect António Lino.

The statue of Our Lady is the work of Master Leopoldo de Almeida and is a replica of the statue that was donated to the Church of Saint Eugene, in Rome, during the Holy Year of 1950.

On May 17, 2006, this chapel was thoroughly remodeled, with the Sanctuary and the Chapel of the Blessed Sacrament receiving major alterations. Architect João de Sousa Araújo collaborated in these alterations.

The idea of removing the Statue of Our Lady from the Chapel of the Blessed Sacrament and placing it in its present place belongs to Architect Luís Líbano Monteiro.

In the writings of Cardinal Cerejeira one finds the following words:

"… the Shrine of Christ-King will tomorrow be the National Shrine, in the Capital of the Country, which will close the rainbow of faith, hope and peace that begins at Fatima and passes through the Vatican…" 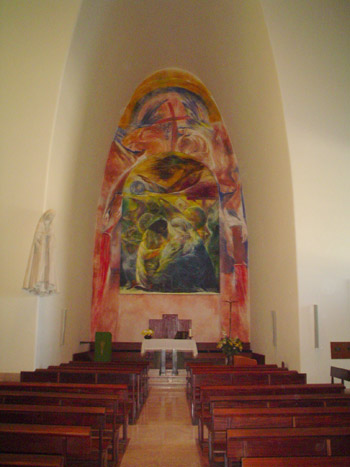 This text served of inspiration to Architect Sousa Araújo for a painting that was placed in the Sanctuary.

On the fresco we observe the third Part of the Secret of Fatima, where we can see Pope John Paul II shot next to a rough Cross. At his side, the thousands of martyrs of the XX Century. On each corner, an Angel pouring out, from vases of crystal, the blood of those martyrs over the entire world.

At the center, we have the triptych allusive to the last apparition of Our Lady to the Little Shepherds, on October 13, 1917. On the upper part of this painting there is Christ blessing the world and enclosing it in His Heart.

On the part opposite the Sanctuary there are three painted stain glasses allusive to Most Holy Trinity, according to the Apocalypse (Book of Revelation) of St. John.

In the Chapel of the Blessed Sacrament, the front of the Tabernacle is composed of two oil paintings, by the same Architect. The main one alludes to the Apocalypse of St. John, which is topped by a triangular painting allusive to the Holy Hour.

On the side doors we find two paintings allusive to the Revelations of Jesus to Saint Margaret Mary Alacoque, in the XVII Century.

In the central portion of the Chapel we find the 14 Stations of the Cross adapted to the situations of suffering of our time.

At the entrance of the Chapel, on the right side, there is the model of the painting of the Sanctuary of the Basilica of Fatima.

Above this painting there is the model of the painting of the Sanctuary of the Cathedral of Nampula, Mozambique, allusive to the glorification of Our Lady of Fatima by the peoples of Africa.

On the left side we find the painting of Our Lady of the Immaculate Conception Aparecida, donated by the Embassy of the Federal Republic of Brazil to the Shrine as a sign of recognition for the link between the Monument to Christ-King and Brazil, represented in the figure of her Patron. 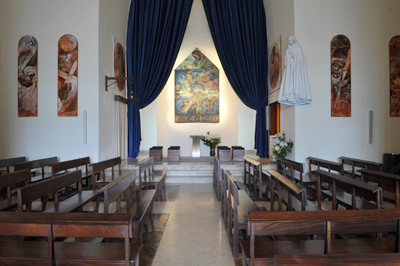 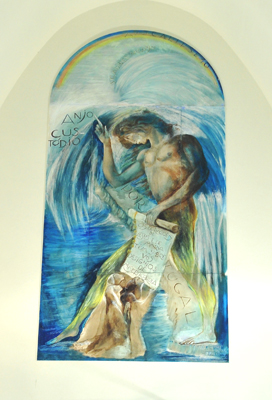 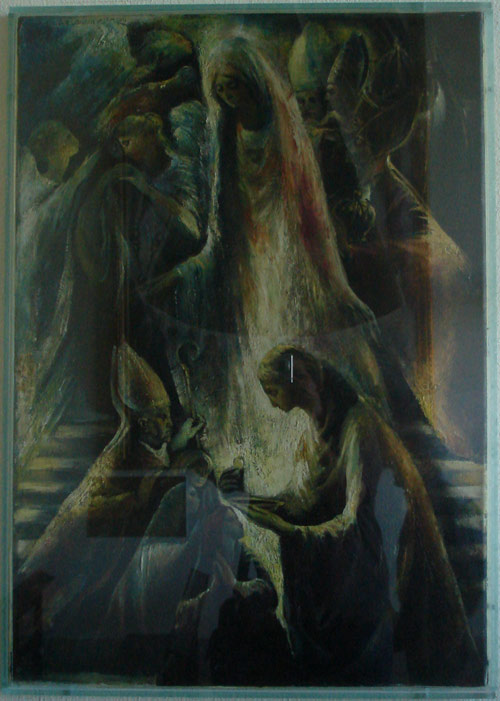 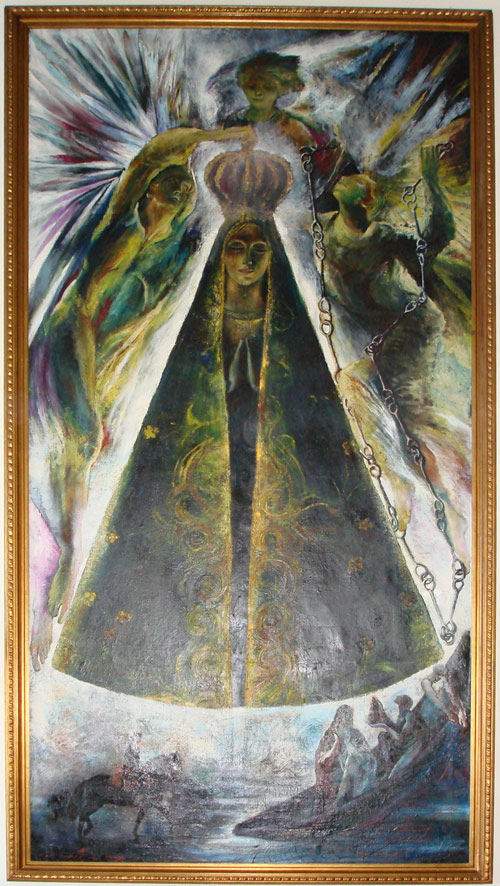